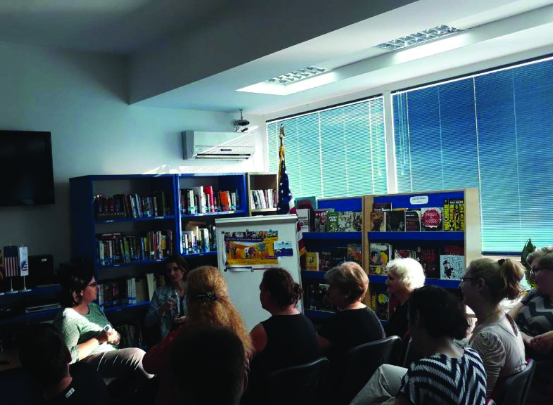 After discussions in Bogdanci and Kumanovo, Stella continued raising similar conversations in Shtip about girls’ education, gender equality and economic opportunities for women. The event was held at the American Corner Shtip on 23rd of May and was supported by our local partner the NGO ’EcH’O.

The first speaker was Blagica Kirov who provides free legal aid for marginalized groups and works on a project targeting violence against women. She pointed to the differences in the treatment of women, such as how a woman is valued by her family, among different ethnic groups. For example, Blagica explained that in the Yuruks (‘Јуруци’) community, women are expected to follow mens’ authority. Yuruks are not allowed to do any work other than to fulfill home duties and their right to education is harshly violated. As a parent of two children, Blagica explain that ‘although I want them to be equal and teach them about gender issues, when it comes to house work, unconsciously, I am inclined more to call my daughter’. This practice of gender inequality already develops when children are young, hence Blagica added that ‘education on gender equality starts from early ages of the children in the home and should continue in schools’.

The second speaker was Kristina Ampeva who is part of the organization “Loud textile” which is focused on women’s working rights in the textile industry. According to Ampeva, it has become an accepted norm that despite having high university education, women work in textile industry and this situation deeply discourages women to build and fight for their career. ‘Women in different regions of the state are differently valued by the society and their families have different expectations from them’- she stated out. She explained that women in Shtip are expected to do all the housework, take care of the children and spouses.

The presentations of Kirov and Ampeva were followed by a lively and honest debate on the challenges that women face. ‘Women in Macedonia face a lot of systematic problems’- as one participant said. Due to the fact that there is no school in Shtip for children with disabilities this woman, had to give up her work and dedicated her life to her child and the home. ‘Even though I had the full support from my entire family to pursue my career, the state failed to provide a proper care system for children with disabilities, and thus influenced not only my decisions, but the lives of many other women in our country’ she added.

Another participant pointed to the harmful gender inequalities that women face at work: ‘I was a member of a working group composed of only men where I was constantly ignored by my colleagues and did not even have a right or space to speak’.

All participants agreed that women should fight on all fronts if they want to raise the awareness for gender equality in the society: they should fight with their families and typically traditional prejudices. All systemic obstacles that women face during education and career should be pointed out in order for the Macedonian society to improve capacities and understand the importance of equality between women and men, and help women achieve the work goals they set for themselves.

Your ticket for the: SHTIP