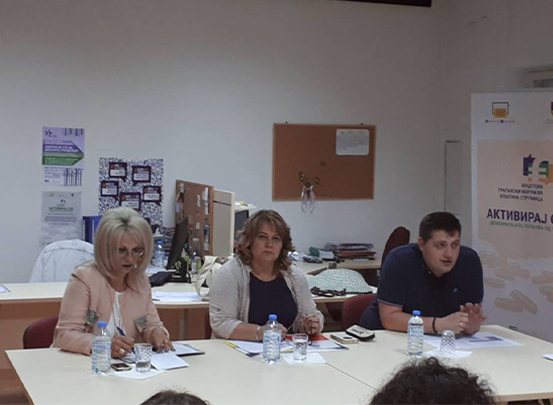 In June, Stella held a THD in Strumica, organised with the support of our local partner ‘The Center of Communities of the Municipality of Strumica’.

Svetlana Mazgaloska Vucetikj, a former Member of Parliament, a gender equality coach and a mother of a child with disabilities talked about the systematic obstacles that she faced with the education of her son. ‘Support among partners is the driving force for having a success within the family, as well for building successful professional careers of both partners’- she pointed out. She emphasized that gender equality is primarily due to the traditional stereotypes developed in a society. ‘All stereotypes related to women are drawn from the tradition of the people that is very difficult to eradicate having in mind they are embedded as a social norm’- she stressed.

Biljana Bajraktarova -a teacher, a career adviser and chair of the career center in one high school in Strumica- made a compelling case that ’women must fight for their dreams and through supporting each other they can pursue every dream they want’. She agreed that traditionally accepted norms are the biggest obstacles the community faces. For example, if young married couples acquire property, the property is registered as belonging only to the man, not to the couple or only to the woman. She also emphasized that there were cases where families with one daughter did not leave all their property to their daughter but to the groom.

Participants of the event shared their own experiences. One woman faced challenges in opening her business that could have been supported through state grants. Yet her application was rejected although she had all the necessary documentation. Another participant, a high school student, pointed that parents still think of careers along gender lines whereby there are male and female professions and that she should choose to study at a faculty that will later bring a ‘woman’s job’ instead of enrolling on a mechanical or technical faculty. An example was followed by a man who had to get used to sweeping the yard while someone else was passing on the street.’ When I swept the yard and would hear someone walking down the street I would threw the broom and pretend to do something else in the yard’- he explained, showing societal pressure for men not to take over housework. The wide consensus among participants followed that there are many traditional norms adopted by the society and have negative impact on women’s educational and career development. The first step in accomplishing gender equality is to break these embedded norms. The fight has to start in the family and should continue in all other social levels. 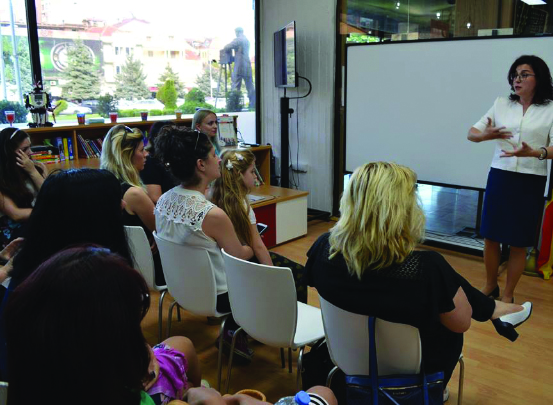 Stella’s forth Town Hall Discussion took place at the American Corner in Bitola on 1st June in cooperation with Stella’s local partner ‘Sumnal’– Organization for development of the Roma community. Similarly to the previous THD, in Bitola too the debate was focused on questions regarding work and family, such as how the family affects the career development, whether the higher education is equally accessible to all women in the community and other similar issues.

The key speakers were Natasha Petrovska, the Mayor of the Municipality of Bitola, Fatma Bajram Azemovska, President of the CSO ’Sumnal’, and Vesela Bogdanovikj, teacher and winner of the award 50 Best Educators in the World. Around twenty participants of diverse backgrounds took active part in the few hour long discussion.

Natasha Petrovska, shared her story and the difficulties of being a woman in politics as well as her role as a decision-maker. She explained the pressure women face in high positions and how their success or failure is taken as a measurement on whether other women should have similar positions, an issue that men do not face. ‘Family support is the key for success’- she pointed out. ‘I have not received the full support of my family in order to enter the male dominated contest for the mayership and during the election campaign’, she added. However, after her victory and being appointed as Mayor, her husband became the biggest pillar of support, and took over the full responsibilities of taking care of the home and children.

According Fatma Bajram Azemovska women should fight for their dreams no matter the scope and scale of obstacles from the family and the society. ‘I have faced big obstacles from my family when I have decided to continue my education at the University but I decided to fight for my dreams, and started to work and enrolled at the University and graduated with high grades’- she added. Azemovska pointed out that ethnicity is a problem and that women in certain ethnic communities are treated very badly. Through many examples, she explained that many of the Roma women are forbidden to study and build their own career, but she believes that in today’s society the new generations are overcoming this problem primarily through education.

Vesela Bogdanovikj emphasized that the success of any women should be based on the cooperation and support of the partner. ‘My entire success is attributed to the sacrifice of my husband who is often alone at home and needs to take care of both the home and the children and still he is a major support for me and motivator to get even further in my career’- she pointed out.

The presentations were followed by a lively and honest debate on the challenges that women face. ‘I have always wanted to run my own company but I have never had the support of my husband’- one of the participants explained. However, after long persuasion, the husband supported her and she now runs the company with more than 30 employees. After the company’s great success, her husband took almost all home responsibilities and child care. The main conclusion from the debate was a strong consensus that women are capable of achieving everything but that partners, families and society more generally should be more supportive to make those dreams a reality.

Your ticket for the: BITOLA