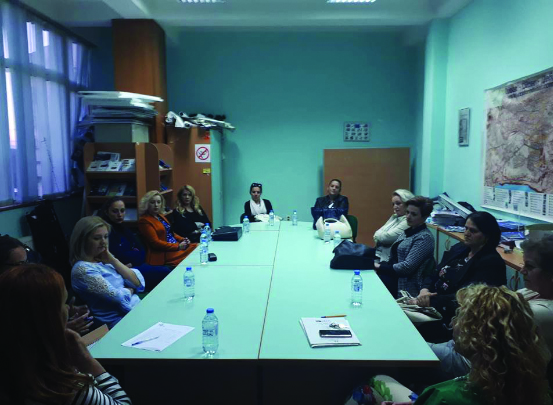 The Town Hall Discussion was held on September 26th, with a great support by our local partner the Center for Sustainable Community Development in Debar. Stella Town Hall Discussions are open for all and the idea is to create a safe and friendly environment for an open and inclusive social dialogue about the situations women and girls face in the academic, professional and everyday life in their communities.

Nora Taravari, who is a Doctor of Science at the Department of European Integration and Communications, was the first speaker. She shared her story and explained the obstacles she faced at work. ‘It is very hard to be successful when your husband is a public person, and society rules the stereotype that one women is successful because of her husband’s success,’ she explained. Nora discussed the family responsibilities and the challenges that come as children grow older. She had very difficult times as she was working in Skopje and all of her family was in Gostivar. ‘However hard it may be, if you really want something you should never give up and I am sure you will achieve that,’ she ended her presentation.

Ljupka Ljubinovska, an activist and psychologist in a primary school, talked about the bullying that young girls suffer at school and the problems they face from an young age. There are several cases where girls even in primary school are getting married, not by their will, but by the will of their parents, she stated. However, the support among the girls in her school is at a very high level, with them protecting each other and being each others’ biggest support.

The participants shared personal stories about how young women are changing the stereotype that women should only care about domestic work duties and they do not need to have a career, as well as the stereotype related to choosing partners from diverse ethnic or religious backgrounds. Young women are fighting against the stereotypes and are shaping a whole new set of community values that break with the old traditional stereotypes. 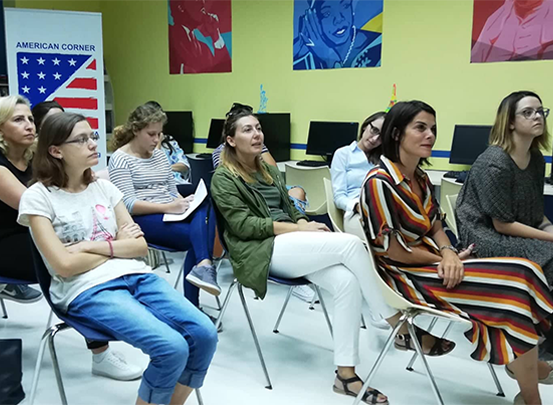 Stella held its eighth Town Hall Discussion on September 20th at the American Corner in Struga, supported by our local partner organization, Club Kombinati. The THD took place both in Albanian and Macedonian and enabled all participants to speak freely in a language that they felt most comfortable with, allowing a better and more honest discussion.

Lidija Mojsovska, a young movie director and the first speaker in this discussion started her presentation by sharing her first short film called ‘Award’, which premiered in 2015, and has won six international awards. The film is dedicated to all mothers in the world and the sacrifices they make to provide a better life for their families. The film brings a strong motivational message to all women that they are capable to manage all problems. Lidija spoke about her inspiration, the women that work very hard to pursue their careers and take care of their families.

The second speaker was Anita Latifi, Stella’s first Ambassador. In 2005 Anita was chosen as one of the five most prominent journalists in the country. Beside her work in the Albanian Theatre in Skopje, she is actively involved in projects on democratic values, development of civil society, protection of human rights, and freedom of expression. Sexual harassment is one of the biggest problems, she noted. She gave examples of how this sexual harassment can be detected, which measures can be taken in order for women to protect themselves, which institutions are competent and need to be informed in such cases. Many women in the audience stated that the education of the men is crucial in prevention of sexual harassment in the future. ‘The power and authority that is given to men that are in decision-making positions give them the possibility to sexually harass women in their institutions,’ pointed out one of the participants. Others agreed and shared a lot of examples from their communities where they have similar cases.

A weak link in this process of protection of women for sexual harassment are the courts and the complex judicial procedures, noted by all women in the discussion. The court record shows that these cases are very hard to prove and that the current legislation is not protecting the victims well enough. The main advice was to inform their colleagues or classmates about the harassment, in order for the victim not to be unsafe, and that women in this situations should support each other, bring charges against the harasser and testify in court.

After a long discussion of two and a half hours, women noted that they will continue to fight hard and be motivated in achieving their goals and dreams. Yet, more support is needed both from a family and an institutional perspective. 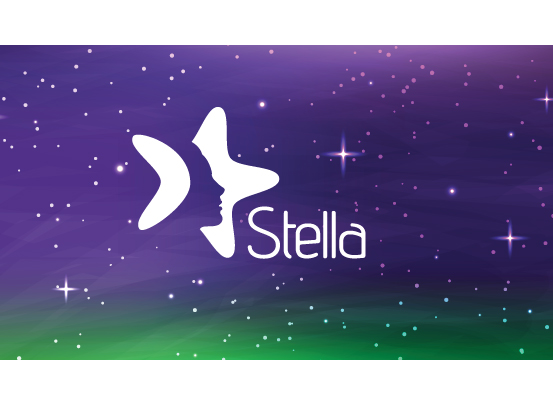 Stella’s seventh Town Hall Discussion was held on September 11th in Hotel Lirak, Tetovo. The event was organized in cooperation with our local rtner, Women’s Forum of Tetovo. One local television station covered the iscussion that involved around twenty women of different ages and various ethnic, religious, and educational backgrounds.

The key speakers were Merita Maksuti, a human rights, social equality, and environmental activist and Ana Vasileva, a feminist and activist for women’s rights. Merita Maksuti shared personal details of her life, from her childhood and explained what it is like to be raised in very difficult conditions of war. She spoke about the many obstacles that she faced during her education and development of her career. ‘There are various kinds of discrimination in the Macedonian society, not only on ethnic, religious or gender base, there is discrimination within these groups too’- she explained. She emphasized that it is hard to find motivation and to fight all the way to achieve your goal, but you should never give up.

Ana Vasileva talked about her experience with the Juruks, an ethnic group that lives in several villages around Shtip. As she has done a lot of research concerning this ethnic minority, she pointed out that the women and girls from this ethnic group do not have any rights like education, free choice of partner, and they are not allowed to have a career or job outside their house. ‘There is a deep systematic and cultural discrimination in the state and we are keeping them instead of breaking them,’ she pointed out. The participants shared a lot of examples where a man got the job despite the fact that for the same position many women had better qualifications, knowledge, and experience. They also gave many examples where women were dismissed from their job, or were forced to quit by the owner of the company just because they got pregnant. ‘It is common for women to get questions on a job interview for your relationship status or whether you will soon be pregnant,’ stated one of the participants.

One women shared a very shocking story about sexual harassment on her previous job. ‘I was sexually harassed by the head of the company, and he demanded from me to be with him if I wanted to get a working contract decision,’ she confessed. She wanted to file a complaint in the court, but she did not receive any support from colleagues and family, and at the end, she withdrew the court appeal and left the company. The discussion ended with motivation for all women facing sexual harassment at any level to look for support from their colleagues, report the harassments to the superiors and the authorities, and file a court appeal. The Town Hall Discussion proved to be an important and unique venue where women feel safe and have the supportive environment to share personal stories and open up about issues that are very sensitive to discuss. 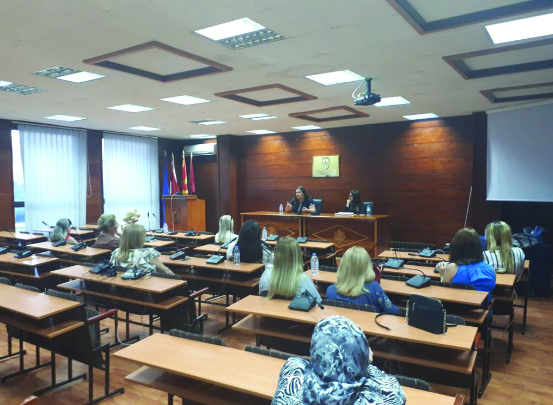 Stella held a Town Hall Discussion in Gostivar on September 6th, supported by the Center for Women’s Rights ‘ETIKA’.

Vesna Popovska was the first speaker. She is an activist and part of the first generation of PhD students at the Military Academy in Skopje. She talked about her motivation to get educated in the field of military studies and choose a profession where more than 90% of employees are men. ‘I faced a lot of obstacles during my education, many people were questioning my decision to get this kind of education and my parents and family were shocked by this decision,’ she explained. ‘Despite the lack of support from family and friends I remained strong in the decision to prove that women can effectively and efficiently do every task in the army as well as men can,’ she added.

Albulena Karaga, a feminist and peace activist that helped many women and children who have gone through the horror of war was the second speaker. She shared her views on gender equality in the Macedonian society and the stereotype that people have about careers for men and women.

The presentations were followed by a lively and honest debate on the challenges that women face. ‘Not having a daily center that can take care of children with disabilities is a very crucial systematic problem that mothers face and the main reason for women to quit their job,’ stated a mother of a child with disabilities. ‘At the same time, the social services funds cannot meet the needs of the children and we have to work,’ she added.

Another woman participating in the discussion worked in the police force and in the army. She shared her personal story and views on the situation of women that work in these institutions that are mainly considered as institutions ruled by men. Although they are respected by their fellow male colleagues, in many situations women face more difficulties during their careers simply due to their gender.

‘It is a very hard to be a woman in politics, when politics are ruled by men,’ stated a member of the Council of the Municipality of Gostivar. She stated that at the beginning of her career in politics, she was very enthusiastic and ‘was running around with all kinds of proposals and projects that can be realized in the municipality,’ but she received little to no support from her colleagues because of her gender, she emphasized.

Your ticket for the: GOSTIVAR