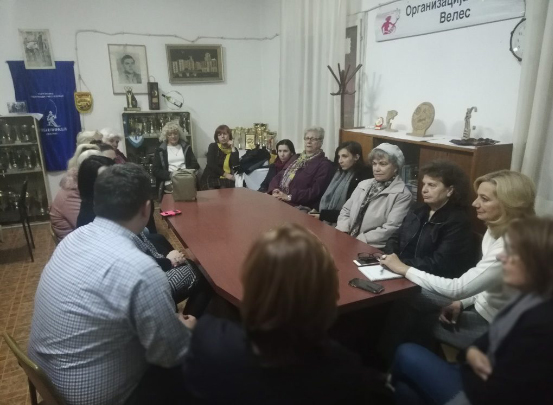 The last Stella Town Hall Discussion for 2018 was held on November 15th at the local community Trajko Prokopiev in Veles. The event was organized in cooperation with the Women’s Organization of the Municipality of Veles.

The key speakers at this discussion were Mirjana Trajkova, the President of the Women’s Organization, Lence Zdravkin, the Honorary President of the Association “House of Hope”, and Rukie Agic, Professor at the Faculty of Agricultural Sciences and Food – Skopje.

Mirjana Trajkova spoke about the importance of women’s associations because they help to support women in accomplishing their dreams and career goals. Women partaking in such associations have moral and financial support in accomplishing their goals. Trajkova noted that ‘through our organization we financially supported 10 start-up initiatives, with business ideas provided by our members and now we also work on their management’. For the older members of the organization they provide different activities and competitions like cooking, sport activities, and lectures in school devoted to gender equality. In the rural areas they help women mainly in modernization of the agricultural process and their education.

Lenche Zdravkin is widely known for her support and help of refugees from the Middle East who transit through the Republic of Macedonia. She explained what women refugees and their children endure, especially their struggles during their path through war zones and to their final destinations, how they survived and how they are living on the roads every day, without losing hope for a better tomorrow. ‘These women are my biggest motivation, they are proving every day that even in the toughest situation in life we should stay positive and fight for our goals for better future’- she emphasized. She shared her story, how she began to support refugees, the crucial support of her family, and how she repurposed her husband’s garage to make a storage for the things that refugee needed.

Professor Rukie Agic noted the importance of support by spouses and family as crucial for any achievement: ‘My career demanded а lot of traveling, specialization in foreign countries and absences from my home, which were supplemented by my husband working at home and raising our children’. Professor Agic emphasized the support she provides to young women starting their work in agriculture in different rural areas, and how women are successful in the manufacturing of organic food.

The presentations were followed by an open and engaging conversations with the attendees. Two young women shared their personal stories on how they were running successful business independently. A lawyer pointed to the difficulties faced with judicial cases condemning domestic violence and sexual harassment in the workplace. There were also stories from women that worked in the army and were on a foreign mission away from home for two years. They also agreed on the importance of family support in order to attain goals.

The engaging discussion, which enthusiastically lasted for over three hours, was concluded on the note that support from family, spouses, and the community are essential for women and girls to have the possibilities in achieving their dreams.

Your ticket for the: Veles