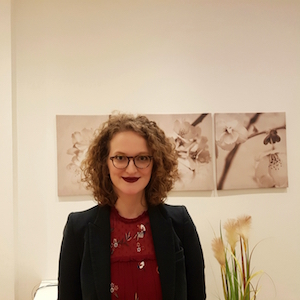 Lura Pollozhani is an Advisor to the Prime Minister of the Republic of North Macedonia on cooperation with international organisations. She is also a PhD candidate at the University of Graz on issues of access to citizenship for different groups. She has previously worked at the University of Graz and the University of Prishtina, as well as at the European Centre for Minority Rights (ECMI) Kosovo. Women and minorities are often sidelined in public discussions and decision making. For this reason, Lura has always strongly believed that it is important to establish a setting of public space where women’s voice is heard, and especially so when they face additional challenges of marginalisation due to their minority background. Participation of women in public life is crucial for society at large.

To her, Stella is the fruition of an inspiring journey and efforts through different locations in Macedonia and Kosovo where she trained different groups on minority rights and gender equality. In her experience as a trainer, the issue of gender equality has always raised vivid and often heated conversations. It is often assumed that gender equality is a taboo topic in traditional, patriarchal societies. However, what Lura has found through her discussions with different groups is not that the subject is taboo, but rather that there is a lack of actively engaged people in discussing the role of women in the public and the private sphere, as well as their rights within both. These discussions, while not always easy and pleasant, have always been constructive and worth having. Stella for her represents an opportunity to create an open, participatory forum to discuss equality and fairness for women.

Your ticket for the: Lura Pollozhani