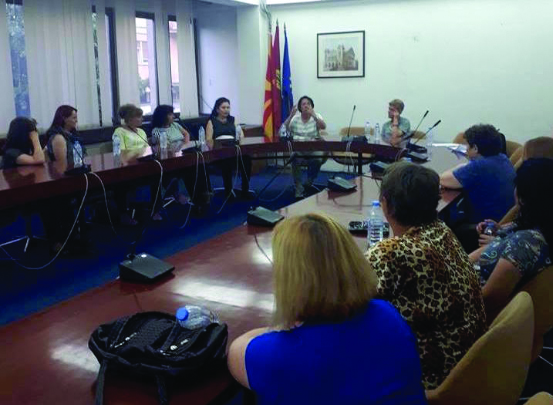 The second Town Hall discussion organized by Stella was held in Kumanovo on the 26 of April 2018. Despite the lower attandance comparing to the first event, the debate was fruitful and revealed many gender stereotypes incorporated in our belief system as a society. We believe that change begins within the local community on a macro level and this is the main reason why Stella orginizes these small-scale discussions.

The guest speakers for this discussion where Ljatifa Shikovska, the President of the Association of Ambrela in Shuto Orizari, and Liljana Georgievska, President of the Association of Bankruptcy Workers UNIT. Our first speaker, Ms. Shikovska gave a great speech and examples that disclosed realities not only regarding gender innequality, but ethnic innequlaity as well. She pointed out that even educated women that have higher education are facing obstacles in acheving their career goals due to their dedication to the family and their children or they face obstructions by their husbands and families that believe women do not need to realize their career goals. It appeared from the discussion that we can still find examples of women dedicated to the household that are prohibited to work and develop their careers.

Our second speaker Ms. Georgievska pointed out that from her own experience the life of a woman is a constant battle, not only in the home, but as well in the society, in the educational system, and in the work environment. Almost everywhere women face difficulties and problems in achieving their goals. She encouraged the audience that no matter what kind of systematic obstacles or stereotypes they will face, they should remain strong and fight for their and the rights of other women too.

The discussion that followed after the presentations, brought out the main conclusion. The new generations and the younger families are devoted to divide the work in the households, and with the support of the community they can more often see men that are taking care of their children and doing the cooking or the dishes. This was unimaginable in the past. The speakers assumed that if a woman wants to achieve a successful career she should have a great support from her husband. However, the main point was that women should remain dedicated in achieving a career while not neglecting their family. A woman is brave enough to fight on both fronts having a great success, the visitors concluded. 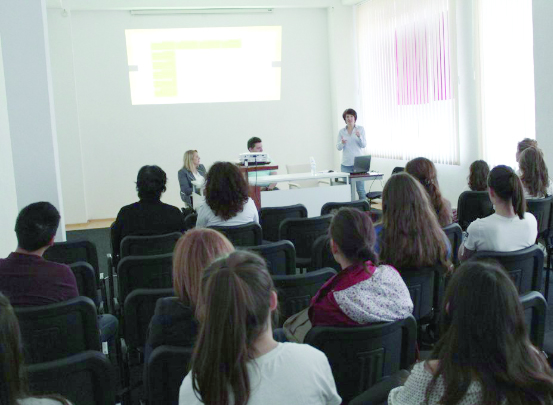 How do we balance our domestic and work responsibilities?

Are you tired of double standards?

What is your role, and what role does the state play in improving the situation?

These are some of the questions that Stella’s team wants to raise among our citizens. The journey of Stella’s town hall discussions stared on the 24th of April 2018 in the the Cultural Center in Bogdanci. The team has organized the first of many Town Hall discussions dedicated to the question of gender equality in the Macedonian society and problems that women are facing during their education or career development.

Only trough constructive discussion in every community we believe that we can find a solution which can improve the role of women in the Macedonian society, as well as enable uninterrupted access to appropriate higher education. More importantly, we intend to discuss the conditions for developing women’s and girl’s careers while breaking the stereotypes and prejudices deeply infiltrated in the society, as well how to overcome the systematic barriers.

The first speaker Ms. Gjavochanova, demonstrated statistical data about the gender (in)balance in the institutions of Bogdanci as well as on national level. Coming from the education sector, she pointed out that there are more women in this sector employed as teachers, professors, administration etc. Further on she provoked a discussion regarding the professions dominated by male employees and professions dominated by female employees and it emerged that the sectors dominated by women employees are somehow connected with the household. It was rather thought-provoking to see that in politics; only 18% are women including mayors, parliamentarians, ministries and political leaders. However, a glimpse of hope rose from the discussion. It was enhanced that the younger generation is somehow shifting the imbalance. As a proof, the speaker gave a practical example for a factory where most of the employees are male, but the main engineers that are newly employed are female.

The second speaker, Ms. Abazi, shared her personal story and emphasized the obstacles and failures that women face while trying to achieve a balance between the home, their education and career. She pointed out that women are more dedicated to the household than men. Regardless that the younger generations are trying to start a change and shift the standards, even today in our society it is considered shameful for men to change diapers.

The most relevant conclusion from the discussion is that education has the potential to develop more gender balanced communities. Only through a progressive educational system, children could understand gender equality and can contribute to a gender equal society.

Your ticket for the: BOGDANCI